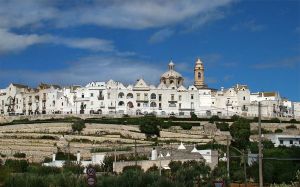 Locorotondo is a comune (municipality) in the Province of Bari, Italy, with a population of c. 14,000. The city is known for its wines and for its round historical center, from which derives its name, meaning “Round place”. It is located in south-east Murgia, deep in the Itria Valley, dotted with white trulli.
The site has been settled since ancient times, as testified by archaeological finds dating between the 3rd and the 7th century BC. The foundation of the town dates back to around 1000 AD as an unfortified hamlet under the jurisdiction of the Benedictine monastery of St. Stephen in Monopoli. The estate of various feudal lords for 500 years, it saw an increase in population, housing development, and the construction of the walls and castle. The Caracciolo family, Dukes of Martina Franca and the last feudal lords, remained in Locorotondo until the beginning of the 19th century.

To support this great project please feel free to make a donation of your choice and help to launch the NuArc Centre.

I’ve been at NuArc for an Ayauascha healing journey. Andrew and Niki are two amazing people looking after you providing meal and accommodation. They are very welcoming and passionate about their healing space.
It was a small group and the atmosphere was quite and relaxed.
Andrew also offered to me a Reiki session.
It’s a safe space for a such deep sacred experience. I have been working with plant medicines for a little bit and I really enjoyed my time in their place. Mattia.
NuArc certainly know how to care and to take care of your needs, your comfort and your safety.
In May, I had the pleasure and the good fortune to participate in their first Ayahuasca weekend. Home from home with the added advantage of very caring, skillful and integruous leadership.
Quite wonderful…David

Thank you for making me feel at home and assuring that I had everything I needed during my weekend of sacred plant ceremonies.
Grazie per avermi fatto sentire a casa e esserti assicurata che avessi tutto quello di cui avevo bisogno durante il weekend delle cerimonie delle piante sacre. Justine